Top of the Rock – Capri Island

“Top of The Rock” Villa is the best location in Capri as you want to enjoy and discover the Island! The Villa has 5 spacious and luxuriously equipped rooms with bathroom and air conditioning. Dinning and parking areas, terraces, garden, outdoor private pool and shower. Wake up with a daily songbird call and the best viewpoint to observe sunsets and sunrises. The most picturesque road of all of Southern Italy will lead you in 10 minutes from the center of Capri to this romantic place.
Enjoy!

Help other travellers decide where to stay

Add your voice to the conversation about this property and your review will be published here.

Map and how to get there


The Villa “Top of The Rock” is one of the twelve Villas built by Roman Emperor Tiberius. Its origins (27 AD) date back to the ancient Greek empire where a temple dedicated to Neptune was built. During the tenth century, it was transformed into a quadrangular fortified building with walls and towers very closely resembling the layout that remains today. It became a ruling fortress sitting on the mountain of Castiglione, dominating the city of Capri, its “Piazzetta” – the main square in the historical city of Capri, City hall and other most important strategic places. 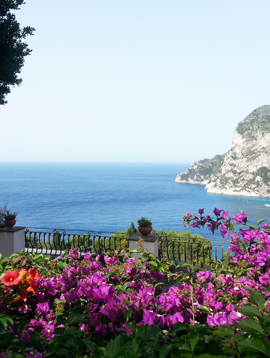 The real Italian Dolce Vita The Isle of Capri is famed as a classy and beautiful holiday destination. It is located in...

See the description of Capri

This site uses cookies. By continuing to browse, you consent to their use. Click here for more detailsOk