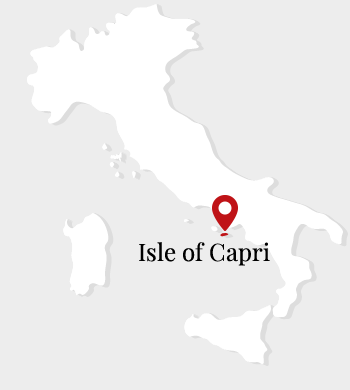 The Isle of Capri is famed as a classy and beautiful holiday destination. It is located in the Gulf of Naples and the Gulf of Salerno, between the Sorrento-Amalfi peninsula, Cape Miseno and the islands of Procida and Ischia.
Capri is an island of many contrasts. For celebrities and the ultra-rich, a point of rendezvous.
For historians, it is the palace-island of the Emperor Tiberius and its Roman remains. It is a dream honeymoon destination.
There are two towns on Capri; Capri town itself, which is in the centre of the island, and is where most of the hotels are located, and Anacapri.
Anacapri is situated on one of the many interior highland of the island.
The main Capri tourist attraction is the island itself. Its views, its rocky seashores and its scenic charm.