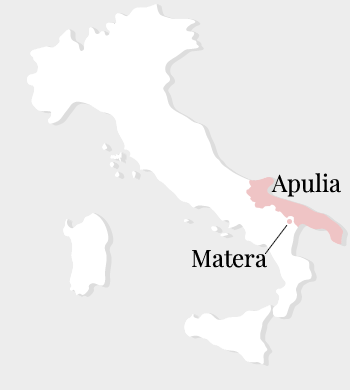 The world most famous original movie set
and its marvelous surroundings

Matera “la Città dei Sassi” the city of stones, is one of the most ancient dwelling places in history, still inhabited today.
In the paleolithic era the first people chose the caves of this area as shelter, in the following years the mountain rock was discovered to be malleable, so digging started in order to create homes, cisterns, and places of worship.
The historic center of Matera with its “Sassi” is probably the only example in the world of inverted building: that is more than simple construction, but digging the malleable rock using the leftovers to complete the building work.
The result being a suggestive sight that when nights falls is lit up by thousands of little lights: absolutely beautiful!

Discover all properties
This site uses cookies. By continuing to browse, you consent to their use. Click here for more detailsOk